Posted at 19:37h in Our News by Book Clubs in Schools 0 Comments
0 Likes

The long lazy days of summer are perfect for getting caught up on your reading bucket list. Here’s what to read this month. 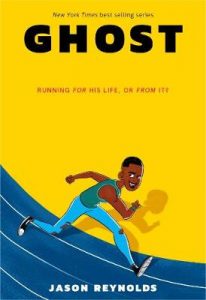 Meet Castle Cranshaw (aka Ghost) who discovered his talent for running one night when he and his mother had to escape his violent father. Ghost isn’t having the best time at school, but he has a whole lot of heart and resilience that shines through all the same. Things take a turn for the better when one day he enters into a spontaneous race with a top sprinter and ends up winning! The coach of the team happens to be a former Olympic gold medallist, impressed with Ghosts running ability- he asks him to join the team. Ghost and his coach form a heart-warming friendship that’s beautiful to read and pushes home the idea that there is hope to be found even in the darkest times. This book is profoundly moving, funny, and packed with gripping action that keeps you turning the pages and feeling inspired by the authentic characters. You’ll fall in love with Ghost and his teammates and look forward to meeting them again in the future books that make up this four-part series.

A Sky Painted Gold is a stunningly written coming of age story. Laura Wood herself describes it as ‘ A love letter to some of my own favourite writers, writers like Dodie Smith, Eva Ibbotson and Michelle Magorian.’ The story follows 17-year-old Lou in the summer of 1929. Lou finds herself drawn into the lives of the enigmatic Cardew siblings; sparkling whirlwind Caitlin and the irresistibly charming Robert. Lou is invited into the Cardew house world, where there lie secrets, whispering mysteries, parties by moonlight and awe-inspiring glamour. Journey with Lou as she finds herself and her heart amongst their mystifying world.

Tara is a child with no birth certificate and has never set foot in a classroom. She has no medical records because her father doesn’t believe in doctors. As far as the government knows, she doesn’t actually exist. Tara’s days grow darker; her brother more violent, and her father increasingly radical.  At the age of 16, she decides to educate herself. Educated is a bold tale of Tara’s struggle to sever the ties with her family and pursue her right and desire for an education. Westover tells this beautiful coming of age tale that penetrates the heart of what education truly means and can offer us all. You’ll find much inspiration in the journey of this courageous character.