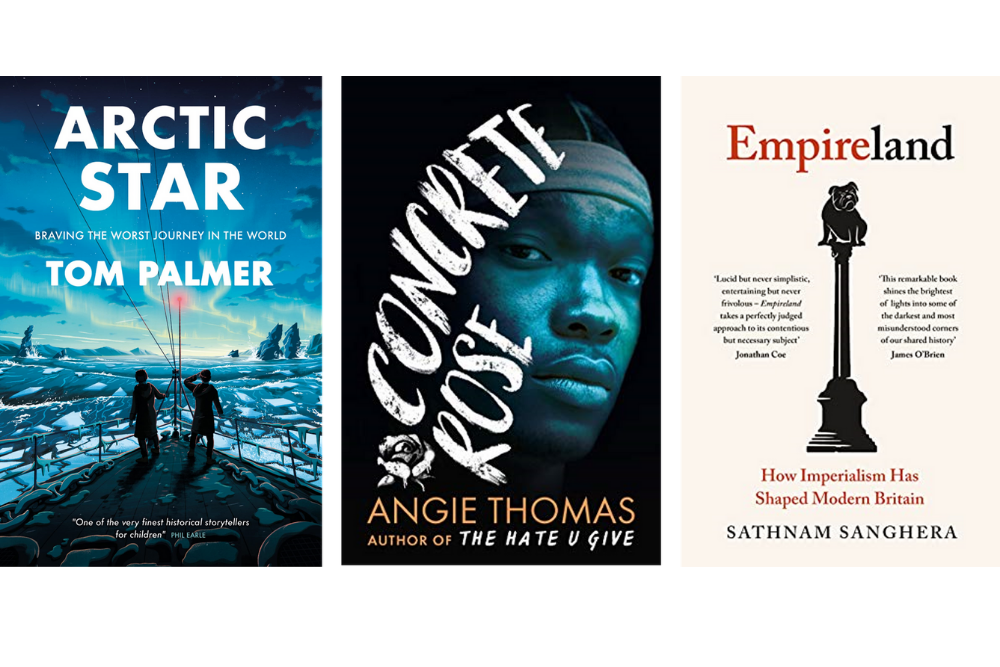 Posted at 18:59h in Uncategorized by Lucy 0 Comments
0 Likes

This month’s glimpse into what we’re reading now. Do get in touch if you – or a young person you know – would like to write a review.

‘You do know that some men who go out on deck to clear ice are never seen again, don’t you?’ As always with a Tom Palmer novel the action begins in the very first line. The reader is literally plunged into the Arctic Sea following the story of three friends Frank, Joseph and Stephen who have grown up together in Plymouth. It was only natural that they would be called up to join the navy in the Second World War. But they find themselves a long way from home as part of the Arctic Convoys protecting supply ships sailing to Russia. As well as the freezing Arctic Sea and enemy torpedoes, the friends find themselves in danger when they visit Russia on shore leave and Joseph shows off his schoolboy Russian. The action intensifies when their boat is torpedoed, their worst nightmare. Will they all make it back to their families?

The story is well researched and shines a light on the everyday heroes who fought during the Second World War. Told mainly through the eyes of Frank, we share his fear and experiences and by highlighting his story, it illuminates the reality of what it must have been like for thousands of sailors like him. I didn’t know about the Arctic Convoys and, in fact, it was not until 2013 that their service was recognised and they were honoured with the Arctic Star, a specific medal that recognises the sacrifice they made.

Thank you to Alison Palmer, BCiS co-director. Ali loves a chat on Twitter.

Concrete Rose by Angie Thomas (suggestion for ages 13+)
In this book, we get to understand more about Maverick Carter, the father of Starr from “The Hate U Give”. It’s set in Garden Heights, when Maverick is only seventeen and has just found out he is the father of a three month old baby. The arrival of this baby forces Maverick to make a choice about the life he wants to live, and to think about his future, not just getting by.  This book details with Maverick’s struggles, especially how hard it is to be a parent whilst juggling school and working, but it is a book full of love, full of roses growing up through the concrete. Maverick has to wrestle with his identity,- son of a King Lord, drug dealer, son, father,- and decide who he wants to be and who he believes it’s possible to be.  I would recommend this book as it is a powerful story, and makes the reader want to endeavour to find love everywhere, like Angie Thomas does.

A huge thank you to Madison Williams, who is age 16, for writing this review for us.

EmpireLand by Sathnam Sanghera (suggestion for ages 16+)
A non-fiction book this month.  EmpireLand is a very readable exploration of how the Empire shaped modern Britain (and indeed large parts of the world).  Sanghera traces how our language, culture and institutions have been influenced by the Empire and how entangled our imperial history is with that of slavery.  It is not a comfortable history involving many acts of subjugation, plunder and violence – Britain owes much of its wealth to its imperial past and perhaps also the sense of British exceptionalism and need to be world leading.

Sanghera is not however interested in applying modern ethics to the past and is clear that he is not trying to create a balance sheet of right and wrong or things we should take pride in or be ashamed of.  Instead he challenges the absence of the Empire in our history curriculum and national dialogue as a form of collective amnesia and makes a powerful case for how a better shared understanding of Britain’s imperial history and legacy would change current social attitudes and political debates.

Thank you to one of our school managers, Katy Donelly, for this review. Katy has a MA in children’s literature and is also a brilliant book blogger.