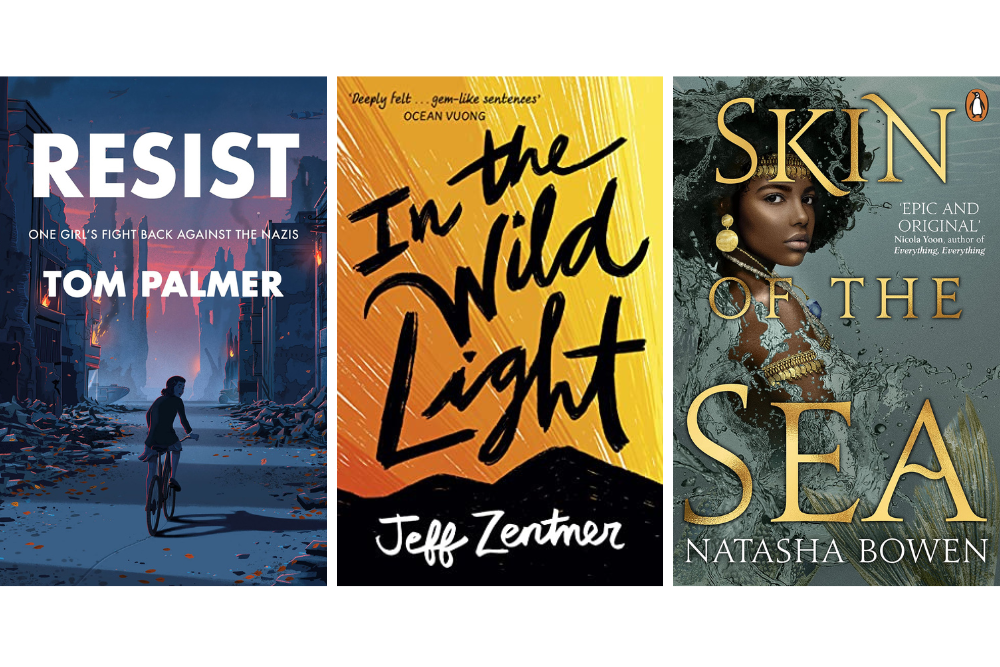 Posted at 11:14h in Uncategorized by Lucy 0 Comments
0 Likes

This month we’re reviewing Tom Palmer’s much-anticipated new novel Resist, due out on 4 August; Into the Wild Light by Jeff Zentner, the author of the Serpent King; and Skin of the Sea, one of Ali Palmer’s favourite reads of 2021, which has made the YA Book Prize shortlist and definitely merits a What To Read Now review. Do share any book recommendations you have!

Tom Palmer’s award-winning World War fiction brings important stories to readers who haven’t heard them before. And with Tom’s meticulous research and brilliant storytelling ability, everyone discovers something new. Resist is based on Audrey Hepburn’s life in wartime Nazi-occupied Netherlands. By keeping her ability to speak English under wraps and going by the name of Edda, she starts helping the Dutch resistance. As a school girl, she is less suspicious, carrying notes and acting as a liaison between different members of the team, including getting messages to an English fighter pilot who was shot down. As we get involved with the story of Edda and her family, the tension and realities of the dangers of her role are clear – when a wrong move could get you shot or taken away to the camps. It is a must read!

Into the Wild Light by Jeff Zentner, suitable for ages 13/14+

Cash has tried hard to put the traumatic loss of his mother to an opioid addiction behind him.  Living with his grandparents, he has carved out an existence mowing lawns and keeping his head down while he finishes high school.  His soul mate, Delaney, is the one bright point in his life.  She too knows the pain opioids can inflict, but she is clever and curious, determined to survive and to protect Cash the best she can. Yet Cash can’t ignore that his grandfather’s illness is getting worse and the local drug dealer looks set to make his and Delaney’s lives difficult. Then Delaney gets an offer that would take them both out of the suffocating limitations of small-town Tennessee.  Is he brave enough to leave? And what will he find out about himself if he does?

This is an atmospheric coming-of-age story in which Cash and Delaney’s friendship is tested and their relationships with their home town reshaped.  You feel for both of them, willing them to find their niche and thrive.  It is also a love letter to small-town Tennessee, however impoverished and inward-looking. Zetner writes evocatively about its natural riches and unrealised potential.

Skin of the Sea by Natasha Bowen, suitable for ages 16+

Memories of being taken and made into a slave haunt Simi. But these memories remain just out of reach as she swims in the sea, able to talk to sharks and scouting for bodies thrown from the slave ships. This is her role now as a Mami Wata, a mermaid. She hasn’t been lost but found and she feels fully alive in the water.

Simi remembers her mother telling her about her birth. “ Here is a story. Story it is…’ a beautiful recollection and a lovely way to begin any story. When Simi rescues a boy who is not quite dead, she plays with the nature of things, and to put things right, she must travel to the Supreme Creator. The book wraps itself around you like a spell. It’s a stunning, beautifully written book. It will enchant you.

We’re looking forward to more from Simi in Soul of The Deep, the sequel to Skin of the Sea, coming out in September.