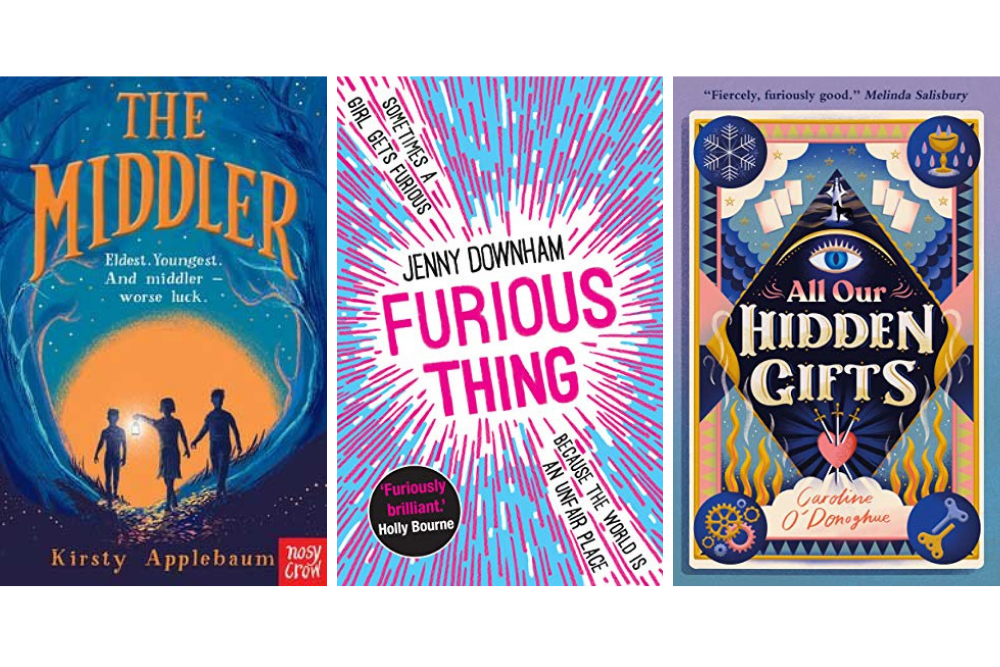 Posted at 14:32h in Uncategorized by Lucy 0 Comments
0 Likes

The books in this month’s What To Read Now all highlight the changes you go through as you grow up. A massive thank you to our guest book reviewers. We’re always keen to include different voices on our website, please get in touch if you’d like to review books for us.

The Middler, written by Kirsty Applebaum, suggestion for ages +9, reviewed by Shamima Edye-Lindner of the charity Give a Book

The Middler by Kirsty Applebaum has you hooked from the first chapter till the turn of the last page. Maggie, the main character, embodies the stages of learning a child goes through. Reading the book as an adult, it goes without saying that you approach it from a different view. Maggie’s naivete came through quite clearly early on in the book. However, if I were to have read this when I was ten years old, I might not have picked up on that.

Regardless of who is reading this, the development of Maggie’s character is what captures your attention; she appears naïve, but so are the majority of people, including adults, who live in her town. As a young child who isn’t quite stuck in her ways, she still has that ‘open to anything’ quality. When she first meets Una, she likes her. She likes having a friend, something she has lacked as a middler but must remind herself of what has been indoctrinated into her by Mayor Anderson about wanderers being ‘dirty, deceitful and dangerous’ – I can never remember the order.

‘I didn’t even know what was right and what was wrong anymore, or who was good and who was bad.’

For me, this line sums up the overall message of the book about what it means to grow up. To learn new things, to abandon old thoughts and ways of life you thought were correct, it’s a state of limbo. Maggie grows up. She stops only believing what people tell her and forms her own opinions. She becomes independent. I think this stems from a place of being overlooked constantly throughout her life. Although Maggie initially befriends Una to capture her and make a name for herself, this decision marks the first step for Maggie, and she decides to do something, to make a name for herself that isn’t Maggie middler.

I would highly recommend this book to any adult, child, dog or cat to read; I enjoyed it that much. There is a comfort in reading children’s books as an adult. It encourages you to reflect on your own childhood.

16-year-old Alexandra struggles to contain her fury. She keeps losing her temper and her stepfather John won’t accept her. He is unkind and manipulative towards Alex and her mother. The only good thing about him is his stepson Kass.

Kass has always been Lexi’s best friend, since even before she could remember. Now Kass is studying architecture in Manchester, she never sees him anymore. With a wedding coming up, Lexi knows she has to do something to stop it. But can she keep calm for long enough? Will she be able to stop her mum from marrying John?

With Iris by her side, she can save the day. She has to ‘do her monster’.

All Our Hidden Gifts by Caroline O’Donoghue, suitable for ages 16+, reviewed by Lucy Walker of Book Clubs in Schools

After penning adult novels, All Our Hidden Gifts is the first book that Caroline O’Donoghue wrote specifically for a young adult audience; its many-layered meditations on identity make it a relatable read for teenagers. All the characters are learning how to become closer to their authentic selves. O’Donoghue shows that you can be who you want to be: identity is not prescriptive; it’s fluid (particularly so in one case). This is a thoroughly modern book: today’s Ireland comes across vividly, albeit with a dose of the supernatural, and tarot contrasts sharply with the religion of the past. O’Donoghue cleverly taps into the resurgence of interest in tarot, where young people are not so much embracing the occult but using the cards as a means to self-discovery.

The book’s fascinating characters stayed with me; I particularly loved Roe. I’m looking forward to the sequel, The Gifts That Bind Us, which is out in February. I’m hoping we’ll join Maeve and her band of friends, and enemies, in another age-old battle of good versus evil in their mystical world.

We featured All Our Hidden Gifts in our Twitter chat Secondary Book Chat. Catch up on the chat from last July.