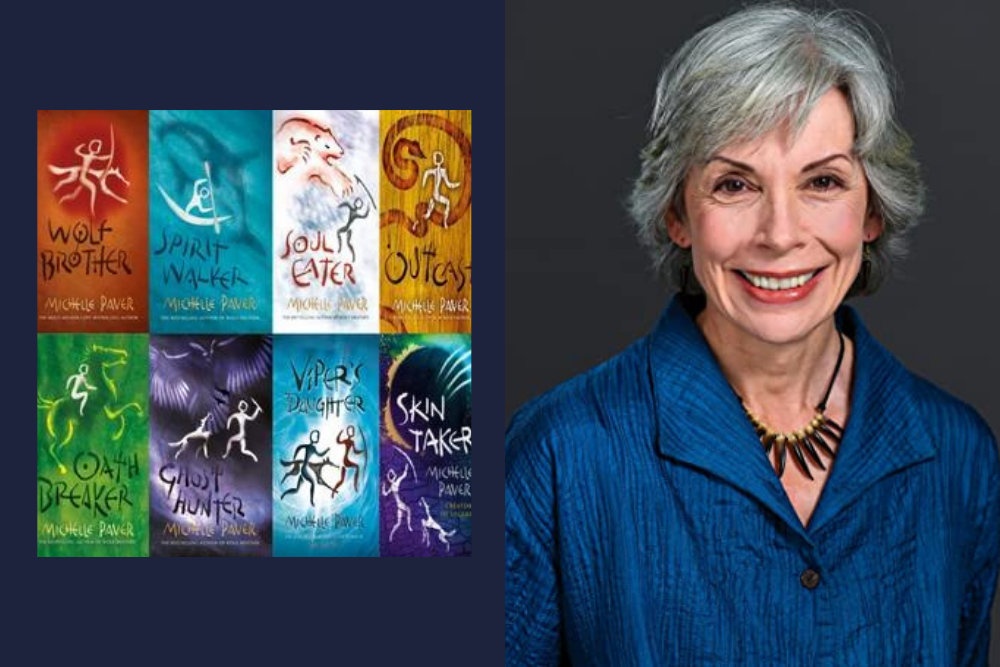 Posted at 15:56h in Uncategorized by Lucy 0 Comments
0 Likes

Ava has been reviewing books for us recently. We’ve loved reading and sharing her reviews. Read what Ava says about writing reviews and what she thinks of Michelle Paver’s Chronicles of Ancient Darkness series.

I’m 13 (in year 9) and started working on my Bronze Duke of Edinburgh Award in September. I have always been passionate about reading, so I wanted my volunteering section of the programme to be book-themed. I was given the opportunity to do some book reviews for Book Clubs in Schools. I found it a little tricky at first but I persevered and hope I have created some reviews that will encourage people to pick up a book that they hadn’t considered reading before.

The Chronicles of Ancient Darkness series by Michelle Paver

The Chronicles of Ancient Darkness is a six book series, with three sequel books. Wolfbane (the final book) is coming out this year. It is set 6,000 years ago in the Stone Age and follows the adventures of Torak, Renn and Wolf. I would recommend the first few books in this series for ages 9+ however the last three books may suit ages 11+ better. I really enjoyed these books because of the interesting themes and fast pace of each book, which keeps you engaged throughout.

After his father being killed by a demon bear, Torak is left alone. He is wounded, terrified, and on the run. Accompanied by an orphaned wolf cub and a raven girl, Torak embarks on a journey to kill the demon, and avenge his father.

I think that this book is a great opening to the series. Michelle Paver introduces each of the characters perfectly and as we read on we see bonds beginning to form. This book sets the scene for the rest of the series and as we begin to learn more about Torak, Renn and Wolf, we also follow their incredible journey to kill the demon bear. I would recommend this book for ages 8+.

A horrifying sickness is spreading across the clans, a sickness which only Torak can find the cure to. He must set off on a quest to the Seal islands, leaving Wolf and Renn behind. Here he discovers a great secret, and uncovers a shattering betrayal.

Spirit Walker is written beautifully. There is lots of detail included, however it is fast paced in order to keep the reader hooked. I really enjoyed the action in the book, especially the part where Torak is running from the Seal boys. I would recommend this book for ages 8+, but it does contains death which could be upsetting for some sensitive readers.

When wolf is captured by a mysterious foe, Torak and Renn brave the cold and search for him in the far North, where little grows and cold kills. However when he discovers his enemy’s true intentions, Torak does all he can to put a stop to their evil plan.

Soul eater is the third book in the Chronicles of Ancient Darkness series. In this book we discover the evil Soul Eaters, characters that haven’t been presented much in the two previous books. I loved this book because of the gripping adventure, and my favourite part is when Renn and Torak are in the far North. I would recommend this book for ages 10+.

Torak has been rejected by the clans after they discover his horrifying secret. He bears the mark of an outcast. The Raven clan, boar clan and a vicious viper all want him dead. Little does he know that the snake is lurking nearby, ready to kill…

Outcast is my favourite book of the series, because we learn more about Renn’s backstory. It also gives some more depth to Torak and Wolf’s character, because the majority of the book is written from their point of view. My favourite part is when Torak is down at Lake Axehead, hiding from the clans. I would recommend this book for ages 10+.

One of Torak’s closest friends has been murdered, and he wants revenge. He must venture into the depths of the Deep forest, where the clueless clans have been driven mad at the mercy of the Soul Eaters. Whilst tracking the killer, Toral soon learns the shocking truth of his parents. Can he avenge his friend before it’s too late?

Oath breaker is the fifth book in the Chronicles of Ancient Darkness series. In this book there is an action-filled adventure with many puzzles to solve along the way. I really enjoyed Oath Breaker, especially the part where Torak rides the black mare. I would recommend this book for ages 10+, but it does include death which may upset some readers.

Only the stony faced eagle owl mage remains. She holds the clans in a grip of terror, forcing Torak, Renn and Wolf out of the forest. They must venture to her lair in the Mountain of Ghosts to fight the final battle.

Ghost hunter is a very exciting finale to the six book series. We finally discover all of the secrets of each of the characters, and we realise how complex each one of them truly are. We also meet Dark, an abandoned member of the Swan clan. I loved the final battle, as it is so action filled and interesting, especially the huge plot twist at the end. I would recommend this book for ages 10+.

After reaching their long journeys end, Renn and Torak are happily living in the forest with their faithful pack brother wolf. All is going well, until one day Renn mysteriously disappears. Again Torak must brave the far North to find her, until his quest leads him to the Edge of the World, and its too late. Soon Torak realises that his enemy is far greater than he could have ever imagined…

Vipers daughter is a sequel to the Chronicles of Ancient Darkness series, and we are introduced to a new character, Renn’s brother Naiginn. We follow Renn and her brother’s journey. My favourite part of Vipers daughter is when Torak meets Naiginn, because the atmosphere is very tense and it made me wonder what would happen next. This book was very engaging, and I would recommend it for ages 12+.

The world is in chaos. The clans are battling for survival, and demons roam free amongst them. A new evil is released into the devastated land, and Renn, Torak and Wolf are tested as never before. Will they risk it all to save everything they love?

Skin Taker is another sequel to the Chronicles of Ancient Darkness series. I would recommend this book for ages 12+

Wolfbane is coming out on the 26th of April 2022. I am looking forward to reading the last book of the series!

A huge thank you to Ava for all your brilliant reviews. Student, teacher, librarian or just reader? We love to feature different voices on our site, so get in touch if you’d like to review some books!