Looking it Up – guest blog by Victoria Gray 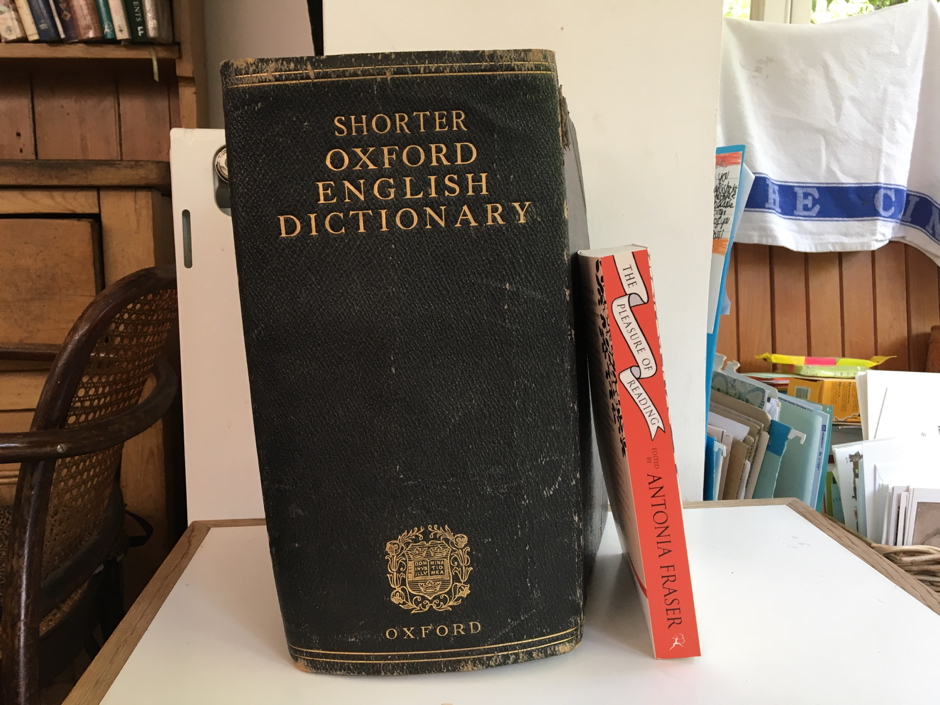 18 May Looking it Up – guest blog by Victoria Gray

Posted at 10:49h in Our News by Book Clubs in Schools 0 Comments
0 Likes

We have a monthly slot on the Give a Book website, our pride and joy, where we invite a special guest to recommend a book that has particularly meant something to them—the book that first got them reading or that they love to give, the you-must-read-this book—their special book. Since GAB hasn’t yet asked me, and I’m itching to share, I reveal it here.

When I was the height of a tabletop, and the age to ask incessant questions I would frequently ask my father what something meant—if I framed the question lazily just as ‘Why?’ my father, a succinct man not given to flights of fancy, would answer maddeningly ‘Z’. To a better-phrased question such as what does blue mean,  he would excitingly say ‘Look it up.’ Up literally meant looking up to a shelf far higher than the tabletop, much higher than me and attempting, without incurring major damage to self—or book—to reach down the enormous dictionary he kept there.

Some families have as their book a fine or association copy of a religious text or the family bible where generations of history are inscribed.  Coming from a blend of multi-cultural stock on one side and devout atheism on the other our family’s book—as big as an illustrated Victorian Family Bible, as heavy as a 2 year old,  as finely bound as any religious text and my father’s pride and joy—was the Shorter Oxford English Dictionary (1933, prepared on historical principles by William Little, revised and edited, CT Onions).

A practical man with just the wrong amount of medical knowledge my father believed that heavy things should be kept on high shelves—it is easier to pull something down than to pick it up.  There is probably a wider truth in that. But many a bruise confirmed its immediate reality. I would stretch as high as I could and not be able to reach it, and time passed and I could just graze the shelf with my fingertips, and then, more time, I could inch my fingers into the lower end of the binding and at last could just manage to pull and drag it down on top of me. I was regularly hit by the huge book falling on to me or was knocked over in my zeal to look something up. ‘Be careful of its spine,’ my father would say—it seems to me more concern for the damage to his book than to me. Mostly a taller stronger person would take down the book and, careful not to break its spine, open it up in a protective way that made me believe the book had a right to a life too. And then we looked it up. It being a mysterious other, an unknown word, whose every aspect of meaning, whose neighbours, friends, history and beginnings would soon be revealed.  All of this took place in a large readable font, with sensible and clarifying use of bold and italic on indomitably thick paper, bound in leather with gold lettering on the spine. Magnificent. (1513 Lit: doing great deeds, but also sumptuously constructed, imposingly beautiful.)

Back to blue—the colour of the sky and the deep sea, and then there’s something Ruskin wrote about the difference between the blue of a flower and the blue of distance that makes you think, and then something about how flames burn blue at the end of their lives, and we’re into ghosts, and the imminence of death— and laundry blue, and blue devils which come to mean depression which comes to mean The Blues. Blue comes from the French and is found in Old German, and Norse. And, in my book, comes between bludgeon and Bluebeard.

I’ve just read Packing My Library, the latest wonderful book by Alberto Manguel, who writes rivetingly about everything to do with reading. I was delighted to find a section on dictionaries—the keys to a magic cabinet, he calls them, a cabinet that holds all you know and all you don’t know. He too recalls the thrill of looking things up.

At Give a Book we give mini-dictionaries to prisoners taking up the challenge of literacy in the Reading Ahead programme. A prisoner wrote that the dictionary is ‘his pocket best friend’. A kindred spirit then.

Being in a dictionary is like being lost in a library, what will you find next to this book, this word, this other world and where will it take you? Hundreds of words are added every year, others inevitably removed, including, bafflingly, from the Junior Oxford, conker and wren. See the excellent counterblast in the beautiful The Lost Words by Robert MacFarlane and Jackie Morris.

Of the 4 entries for fake, (in between faitour (an imposter, cheat) and faki (from the Arabic for one learned in the law)),  the two earliest definitions concern ropes and coils.

Our more familiar meaning comes from fegen, of Germanic origin, thieves’ language meaning to furbish up, clean or sweep. As for news (between new-mownas hay 1470 and new-set 1709), a Middle English blurring of the French word nouvelles.  We meet our beginnings as well as our neighbours.

Now, I have become one of the tall people and can take down the book myself without much strain—having my own theories about mechanics I keep it on a middling shelf, just above waist high, and so far so good—I can bring it down and open it up for the smaller ones. If I’m lucky there will come a time when I am no longer able to do that. But for now, taking care not to break its spine, I travel through time and space at the turn of a page.

By Victoria Gray, Executive Director, Give A Book

Give A Book is a UK registered charity. They facilitate the gift of books to selected charities and other organisations, such as schools and prisons.