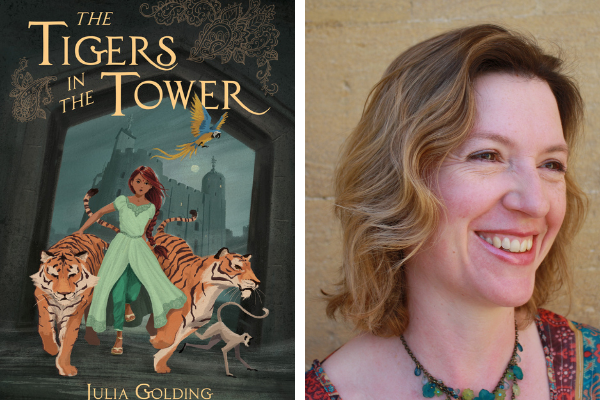 Posted at 10:31h in Our News by Book Clubs in Schools 0 Comments
0 Likes

The author Julia Golding has written a blog post for us about tigers to celebrate the launch of her new book, Tigers in the Tower.

In my new historical novel, The Tigers in the Tower, I tell the story of the ancient menagerie in the Tower of London and what happens when a girl from India arrives with a shipment of two fine Bengal tigers. They arrive just as the Duke of Wellington, the famous general who defeated Napoleon and by 1830 is now Prime Minister, is threatening to close the menagerie. The book is based on real events and research for it led me to lots of facts about tigers and tiger-keeping that I hadn’t known before.

Here are five things that you might not know about tigers – four fun things and one serious:

1) Roar! – Tigers have the best roar of all the big cats and it is the one you probably think belongs to a lion. How did this theft happen? Have you ever seen the beginning of an MGM film with the roaring lion? That’s Leo (there have been quite a few lions of this name cast in this iconic role). His secret is that, though he makes a wonderful facial expression as he roars, what you actually hear is a recording of a tiger. A lion’s roar is more of a coughing sound that can travel miles but simply isn’t as impressive on screen. I heard this for myself recently on holiday in South Africa, lying in bed knowing the lions were actually a long way away (or that was what I had been told….!) I hope I’m not spoiling Simba and Mufasa for you, but I’m afraid the same is true of The Lion King, where the roars were either made from tiger recordings or by human actors. 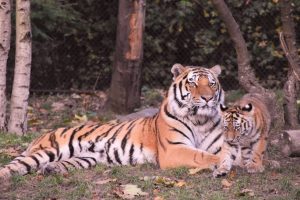 2) Cute but dangerous – Tiger cubs take about 100 days to develop in the womb (that’s compared to about 280 for a human). The mum usually has two or three cubs, but no more. They spend up to two years with the mum and learn through playing. They look very cute but remember they are definitely not suitable as a pet, as my heroine Sahira will tell you. An adult male tiger can weigh over 250 kgs (or over 500 lbs) and just the tongue can strip meat from a bone, so no licking allowed!

3) Watch out, crocs! – People love tigers and one of the most famous of recent times was Machli, who lived in an Indian national park. A beautiful big cat, she had distinctive fish-shaped markings on her face, which led to her name (Hindi for fish). After being caught on film wrestling a 14-foot crocodile, she came to stardom and even had her own Facebook page devoted to her. She died at 19 of an age-related illness (not from a crocodile).

4) The boy swallowed by a tiger – My book tells of nineteenth century keepers of wild creatures in London and it is all based on true events – life is often stranger than fiction. One real character is Mr Jamrach who had a shop for exotic animals on Ratcliffe Highway, East London. If you had had the misfortune of being on the street in 1857 you might have suffered the fate of 9-year-old John Wade, a child who happened to be passing when a tiger broke out of its pen. The angry tiger seized the boy and ran off with him. Happily, Jamrach and others made the tiger drop his prey and John survived relatively unscathed, though doubtless with nightmares of being carried off in such an unexpected way. He became famous in cartoons as the boy who was swallowed by a tiger, which sounds more like something from a nursery rhyme than real life!

5) Will tigers survive the century? – As much as we all love tigers, we must always remember how endangered they are. If we want others to enjoy them in future generations, we have to act now. Sadly tigers, like many other creatures, are suffering from humans taking over what was once their habitat. In the last 150 years, they’ve lost over 90% of the land they used to roam. There are only an estimated 4,000 left in the wild. The ones in my book are from Bengal – that’s an area in Eastern India. This is the biggest surviving group of tigers (a population of around 3,000) but they are living in one of the most populated countries on earth so the prospect is not good if conservation efforts don’t succeed. If Sahira lived today, she would be working as a wildlife conservationist to make sure they don’t become extinct as a species. Maybe you will be able to do something to help too?

(Photos from Unsplash and cartoon from Boys Own Paper).

A big thank you to Julia Golding. Find out more about Julia on her website.

Donate to BCiS
We use cookies to ensure that we give you the best experience on our website. If you continue to use this site we will assume that you are happy with it.OkI do not consent